Lead by longtime branding and entertainment expert Paul Jankowski, 1BE specializes in helping brands create direct-to-talent brand partnerships as well as artist management services that are rooted in strategy and insights with a digital-first focus.

The new division unveils two client projects: Lipton Tea and their signing of Luke Bryan as a brand partner and recording artist, Danielle Bradbery. Lipton Tea retained 1BE to secure the Luke Bryan partnership, which includes Lipton’s sponsorship of Bryan’s “Proud to be Right Here” tour. 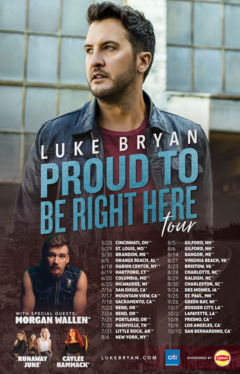 “Paul and his team have been instrumental in managing all aspects of our Lipton brand partnership with music mega-star Luke Bryan,” said Pepsi-Lipton Partnership Brand Communications lead, Heather Simmons. “Paul has personally been involved in every step of the way.  He navigates inevitable challenges with urgency and professionalism, and keeps everything on track and moving forward.   Paul and his team are responsive and always willing to go the extra mile. Working with them is truly a pleasure.”

The first client to join their artist management roster is Big Machine Label Group (BMLG) artist, Danielle Bradbery. The two-time ACM New Female Artist of the Year nominee and multi-faceted artist is featured on the female-focused “Charlies Angels Soundtrack” which was produced by Ariana Grande. This follows the release of Bradbery’s sophomore album “I Don’t Believe We’ve Met” via BMLG Records.

“Finding the right manager is as important as finding the right song,” said Bradbery. “There has to be deep mutual trust as well as an unwavering passion for the music.  There was no doubt that Paul and his team were the right fit for me, especially at this important phase of my career.  I love how they think strategically while really understanding me as an artist.  I’m excited to be One Bullet’s first artist!”

About One Bullet Entertainment

Two-time ACM New Female Artist of the Year nominee and multi-faceted artist Danielle Bradbery is featured on the CHARLIE’S ANGELS SOUNDTRACK with the haunting track “Blackout” written by Jonathan Perkins and Nikki Williams. Produced by Ariana Grande, the female-focused album is the soundtrack to the original motion picture directed by Elizabeth Banks. This follows the release of Danielle’s sophomore album I DON’T BELIEVE WE’VE MET via BMLG Records. As the title suggests, Bradbery re-introduced herself after taking time since her debut LP to focus on the writing process and, for the first time, infusing her own story into her songs – penning seven of the album’s 10 tracks. Lead single “Sway” perfectly infused her R&B, soul and Country influences, while empowering follow-up anthem “Worth It” led to national TV performances of the emotional tune on NBC’s TODAY and The Voice. Bradbery recently returned to the radio airwaves with “Goodbye Summer,” a fresh take on album cut “Hello Summer” with Thomas Rhett adding a male perspective to the seasonal story of love and heartbreak. The Texas native has also released her take on some of today’s most popular songs for her compilation “Yours Truly: 2018” – Ariana Grande’s “God is a Woman,” Post Malone’s “Psycho” and Kacey Musgraves “Slow Burn.” Newly added to that list is the Oscar-winning tune from A Star is Born, Lady Gaga’s “Shallow” featuring Parker McCollum. Bradbery has been fine-tuning her unique sound since getting her start winning Season 4 of NBC’s The Voice and achieved multiple ACM nominations as well as CMT Breakthrough Video of the Year and CMT Performance of the Year. She recently opened for Kane Brown and headlined CMA’s INTRODUCING NASHVILLE TOUR across Europe.