Recording Artist Meg Berry is celebrating success with current single “Colored Balloons” as single reaches the Top40 and AC/HotAC charts, as well as, jumping into the Hot100 this month. Momentum for the song is gathering, giving fans a first listen to the infectious single. 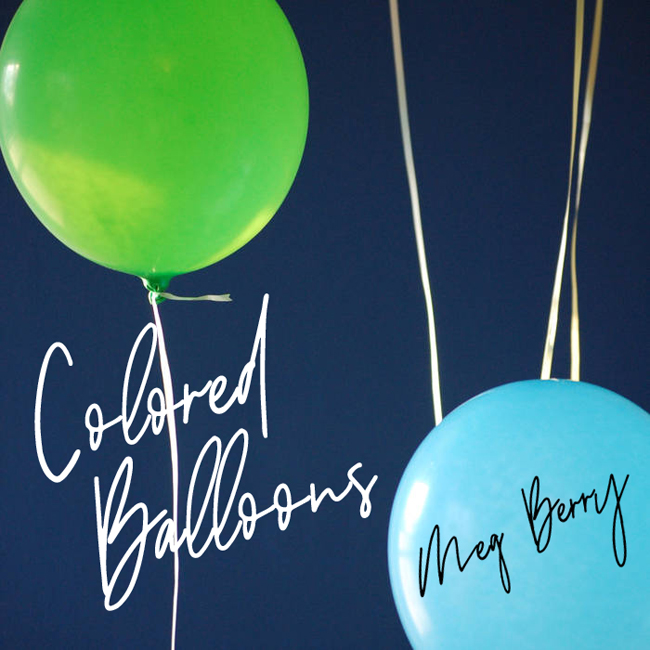 “Wow” says Berry about her follow up success to her break out holiday single “Happy Holiday Song” which debuted at #3 on the Holiday Charts in 2020.  “I really don’t know what to say except thank you to all the listeners and fans requesting ‘Colored Balloons’ and thank you to all of the radio programmers who are playing it.”

Berry wrote this song as she found a moment of deep peace from going through a very tough time. While absent-mindedly watching balloons sway towards the ground after a party and watching the balloons make a gentle fall from their heights allowed her to feel the peacefulness coming down and in those moments of watching the balloons, she realized the relief from the burden of the stress she was carrying.  Wanting to share that moment of peace, she wrote ‘Colored Balloons’ to share and capture it forever.

“With all the stress in the world, I was honored to be able to share “Colored Balloons” with radio in the hopes it would give listeners everywhere an easier more peaceful day.”

Meg has been praised everywhere from Billboard Magazine to Refinery 29.  She made her debut as a solo artist headlining the reopening of NYC’s beloved Bar 13 for the final CBGB’s Musicfest. Meg Berry’s “Colored Balloons” can be found in the Top 10 of 3 Top 100’s- the Hot 100, Top 40 and AC, currently. It is the follow up to her Holiday hit “Happy Holiday Song” which debuted at #3 on the Holiday charts and stayed there for the 2020 holiday season.  For more info go to MegBerry.com

Country music has always been regarded as an American sound bred in the southern regions, but if fans have learned anything from the likes of Keith Urban, Country music can come up from anywhere in the world. This leads us to the German radio cowboy himself, Rob Georg. Very few would imagine a cowboy from […]

END_OF_DOCUMENT_TOKEN_TO_BE_REPLACED

The Primadonna Reeds are honored today as an Official Nominee at the 2021 New Music Awards sponsored by New Music Weekly Magazine. The Primadonna Reeds’ 2020 hit single “Glitter Girl” placed high on both Top 40 and AC/HotAC charts. The song was also featured in the highly acclaimed feature film, “Rolling Stone: Life and Death […]

END_OF_DOCUMENT_TOKEN_TO_BE_REPLACED

Big Jim Davis started writing songs at the age of 15, and decades later he believes he’s delivering his best work yet. Throughout his life, Big Jim Davis has pulled inspiration from a wide variety of heavy hitters flavored with personal experiences and the universal feelings of hope, love, sadness and loss. The likes of […]

END_OF_DOCUMENT_TOKEN_TO_BE_REPLACED

Bovian’s “Love You To Death” has been picking up listenership and starting conversations about love and loss during these unparalleled times. It’s the featured single from his debut EP released this week entitled “Dom Bovian”, an homage to his recently deceased partner and confidant, Chris. “Love You To Death”, Bovian’s new single has debuted this week at […]

END_OF_DOCUMENT_TOKEN_TO_BE_REPLACED

The day after Labor Day 2020, the area of Happy Camp, CA and the surrounding territory was hit by it’s most devastating fire to date, The Slater Fire. This blaze took out more than half the town of Happy Camp, as well as thousands of acres of the Klamath National Forest. This area is the […]

END_OF_DOCUMENT_TOKEN_TO_BE_REPLACED

Indie Artists: Leading The Way For A New Generation

Welcome to our New Music Weekly Special Indie Artists Music Edition. We are thrilled to be able to bring you this special issue focusing on independent artists and bands and their effect at radio and on our weekly music charts. From the very beginning we here at NMW has always been about “leveling music playing […]

END_OF_DOCUMENT_TOKEN_TO_BE_REPLACED

Vocalist and performer Manny Blu, has released the music video for “Might As Well Lead”. Written by Aaron Eshuis, Joe Clemmons, and Logan Wall, the new track gives fans a taste of what they can expect on the new EP to be released later this year. This year, the former hockey player, MMA fighter also […]

END_OF_DOCUMENT_TOKEN_TO_BE_REPLACED

Kailee Spark is a chaser: she’s in constant pursuit of life and love and an outlet to illuminate her thoughts and feelings. The things that make her passionate are the things that many people would overlook; she knows when to slow down. Living in Hilo, Hawaii makes serenity easier to find. She generously shares her solitude […]

END_OF_DOCUMENT_TOKEN_TO_BE_REPLACED

Nashville, TN U.S.A. – Promising songwriter Tommy Rice celebrates the release of his new single “The Greatest Love Of Them All”. The warm acoustics and steady melody cradle the nostalgic sentiment of this much anticipated follow up single for “Eternal Promise Of love” and “Miss Her More Today Than Yesterday”. 2021 NMA Nominee for Crossover […]

END_OF_DOCUMENT_TOKEN_TO_BE_REPLACED

“When Country Comes Back,” Colt Ford’s New Single and 41-Date Tour, Scheduled For Release May 28th

Shari Rowe Reflects on Past Year with “Long Hugs”