If you tuned into the recent episode of the SBS Podcast, you’ll have found us taking a turn into Country music for a section of the show – rare for us, but when there’s something worth spinning & talking about, you know we find a way to make some time for it.  Rob Georg is a man worth talking about for sure, and you got it, definitely strong material worth spinning – we played his latest single “Dust.”

As I mentioned on the show, he works with horses professionally when he’s not making music…so in terms of authenticity, believe me when I say, the man’s got PLENTY of it.  Rob’s clearly livin’ that Country lifestyle and lovin’ every minute of it – dude writes a great song and he’s traveled all the way from Germany to Nashville in search of bringing his music to life.  It began with one of my favorite songs in Georg’s catalog actually…a song called “Push That Horn” that he’d eventually release as his first single after getting it the remix & refinement he was searching for in the south of the USA…if you have the chance, make sure to have a listen to that tune…because in it, you’ll find the magic that would make any singer/songwriter believe.  Put it to you this way – if you had written that song, you’d be on the first plane to Nashville as well; “Push That Horn” unlocked & revealed the promise & potential of an artist like Georg – and now he’s right ‘in it’ – he’s gone on to release three singles since then after racking up thousands-upon-thousands of clicks & plays on his debut single.  What I hear in “Push That Horn” is the sincerity of a songwriter that really understands how to connect pure emotion to the words & music – it makes perfect sense to my ears that Rob Georg would have as much support & enthusiasm surrounding his music as he’s getting already…the man definitely has the songwriter’s gift & a golden voice to boot.  Check this out for yourself, have a listen…”Push That Horn” is a great first impression of Rob’s music.

On to the new stuff!  “This Ain’t My First Rodeo” – what’d I tell ya?  The man is a true cowboy through & through and if that title doesn’t give it away right there or prove my theory correct right away, I don’t know what would.  Aside from the sound of the song itself of course, cause that’ll prove my point just as much; you can hear the Country soul radiating out of every pore of your speakers – it’s more than clear from listening that Georg truly loves making music.  You know it, because you can feel it; that’s the magic of music no matter what genre you love or what genre you’re listening to – if an artist/band has the energy, passion, and genuine interest in their material, you get outstanding results like you’ll hear on “This Ain’t My First Rodeo” that have the potential to pull in fans from all over the place.  Passion & sincerity…never underestimate qualities like these…because no matter what you’ll ever hear, these are the real hooks.  Georg has plenty of both and stomps through the rhythm & groove of this up-tempo single with confidence – he should be, the material is plenty solid from the hooks to the production & performance – if I had any complaints, y’all know I’d make’em…facts are facts though, and even if Country isn’t my own go-to genre, I still fully recognize what’s put together with heart & skill.  Georg has plenty of both of those qualities too…heart & skill…it’s in each of these tunes…you can tell from the sheer attention to detail and how absolutely nothing has been overlooked – each of these singles have everything ya want.  Dude has sure got the guitars absolutely nailed on these singles…the tone on’em is electrifying and always a major factor in the way Georg’s material will pull you in to listen – but give the man credit for his writing & vocals as well for sure.  The structure and dynamics of the stop/start chorus will pound & stomp hard for your attention, and the smooth cool of Rob’s confident cowboy drawl is a perfect fit.  He’s working with the modern Country vibe here…what Georg creates is built for the right here & now. 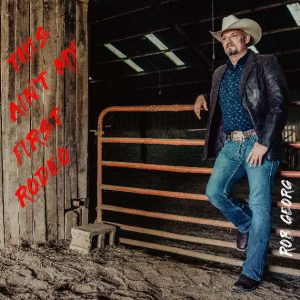 What really impressed me perhaps more than anything else, was the absolutely STUNNING balance you’ll find between the music Rob Georg makes…like how I honestly couldn’t decide whether or not I liked him better at his more melodic & soft-spoken like on “Carry The Wind” or “Push That Horn” or the gripping fun and up-tempo pace of songs like “Dust” or “This Ain’t My First Rodeo.”  The dude tackles both sides of the extremes of music with true professionalism, flawless musicianship, and really strong material.  I know I’ll likely default to his more melodic stuff over time, because that’s just what I dig on personally in my own daily life & what I naturally gravitate towards in any genre as a music-listener…but I also can’t imagine not ever always having time for a tune like “Dust” that comes out so magnificently strong either.  Bottom line is, recognize that this man…this Mr. Rob Georg…he’s more than capable of creating something truly memorable and single-worthy in a fast or slow setting, no problemo at all.  “Carry The Wind” has a much more grandiose feel to it…like that lighters-up moment at a concert, where you can visibly see that a song like this catches the attention of everyone listening right there in front of you…you feel a connection to this tune by the way it expands in the chorus to such an expressive sound.  I’m probably a bit more partial to the humble innocence of a song like “Push That Horn” by comparison, but I can certainly appreciate how all-inclusive the vibe of a song like “Carry The Wind” becomes to experience as well.  He’s dipping into a more ballad-driven sound on this tune, mixing in religious connotations with personal stories and a bold, sweeping set of emotions that continually summon more strength as the song plays on.  I can hear a bit more of the ‘Nashville’ sound in this tune than the others, I’ll say that…”Carry The Wind” sounds a bit more designed to be a hit than say, something like “Push That Horn” that sounds more organic…but both tunes would likely appeal to the same kind of listeners out there at the end of the day.  I like the…hmm…I think that’s a pedal-steel guitar goin’ on in the mix of “Carry The Wind” is it not?  I’m pretty sure it is…those beautiful bendy notes that float throughout this single; definitely a huge feature in the sound of this song…the backing vocals also deserve a ton of credit as well, which end up playing a more pivotal role as “Carry The Wind” reaches its grand finale, capitalizing on the all-encompassing & comforting sound of the chorus by adding in more presence & voices to bring the sweetness in this song soaring straight to the surface by the time it ends.

“Cowboys don’t cry – we just get dust in our eyes.”  I mean, c’mon people – that’s a brilliant line for a song right there is what that is…you’ll find plenty more of’em too on Rob’s latest single “Dust,” which we played on the most recent episode of the SBS Podcast.  If you didn’t catch the show, let me tell ya, this is BIG Country people – everything about “Dust” sounds MASSIVE, and ultimately Georg has got himself both a seriously relevant, modern-day Country vibe goin’ on, with extreme crossover potential.  I told ya on the show and earlier on in this very review that the authenticity radiates from this man – because he LIVES Country, full-stop.  But just in case you won’t take my word for it – I’ll prove it to ya right here, right now – take a look at the brand-new video for “Dust” by Rob Georg below & turn this up!

The stomp through the chorus hooks is SO COOL, I’m not even kidding, it’s just an energy you gotta experience for yourself, Rob sounds large & in-charge throughout “Dust” like it’s his most significant moment in the spotlight so far – and maybe it is, or will be; there’s EVERY reason a song like this should go on to be a massive single.  You flat-out couldn’t ask for more from Georg…the writing is bulletproof, the guitars are OFF-THE-CHARTS-AWESOME with the way they ring out into the atmosphere of this tune, shimmering, shining, and possessing that seriously enticing spark of sound our ears all wanna hear, and the man can certainly sing – I think he does a spectacular job singing “Dust” and owns every inch of this single with the booming, confident sound, perfect tone of voice, and energy this song really required.  For what it’s worth, being a guy that’s largely outside of the genre, even though I’ve only been listening to “Dust” for a short time myself, I’m firmly addicted to it – this is definitely an example of Rob Georg at his most electrifying & slick, everything about this single just oozes cool at every possible opportunity.  Whether or not everyone out there will connect with this hook as strongly as I have, it’s probably a bit harder to say…there’s a slow-burning intensity that fuels the fire of this cut…to me, this makes for the perfect sing along – I absolutely love how Rob sings the chorus of this single and for myself personally, I think the main hooks are seriously memorable.  I’d imagine many others out there will feel the same; but one way or the other, I’m tellin’ ya – “Dust” WILL get ya onboard with Georg – the verse is loaded with gripping hooks & melody of its own, the instrumentation is all-out wild and consistently engaging, and again, I don’t think you could ask for a single thing more outta the guy when it comes to how he sings this song, or any of the others for that matter.  Like I said earlier on, the attention to detail here on these singles is truly remarkable and noteworthy…this is well-refined Country and seriously strong stuff.

Available to radio via AirplayAccess

Find out more about Rob Georg at his official pages below!