Today Larry Pascale’s video for the brand-new radio single Living A Dream is being dropped and the single is now available on all platforms.  The track is rooted in a solid foundation of a rock classic, lyrically inspiring and memorable. The new video is impactful, exciting and will draw viewers and listeners in. 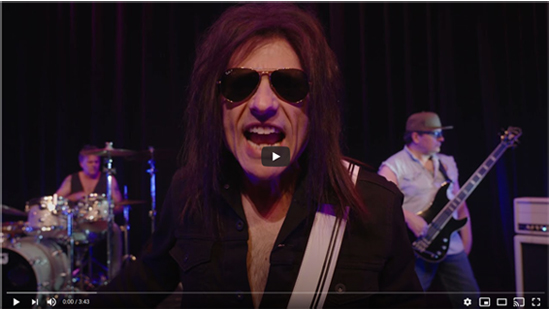 ”I wanted the first single from the new album (Split Down the Middle Oct 21) to be very impactful not just lyrically but musically too” Pascale says.” I believe this track delivers those goods and will inspire over and over for a lifetime; it has that everlasting message”

Pascale draws his inspiration from many fronts both musically and lyrically.” I want to affect people’s lives with my music” Musically he does not write in one genre which makes him in a sense unique. “I cross genres, Rock, Americana, Pop, Country Rock, Hard Rock.” The ability to be versatile is the secret weapon” Pascale goes on to say.

Looking for your next hit? You have come to the right place. Track after track after track of hit making material… Larry’s combination of uplifting, original sing along, melodic rock transcends all ages and genres. From ages 8 to 80 and beyond, fans are enjoying his music. Amazing hooks, melodies, harmonies, blazing guitars, and songs you will keep on singing because you cannot forget them.  THE HITMAKER! The versatility in Pascale’s songwriting is truly unique. Bringing music fans of all genres together. Rock, Hard Rock, Country Rock, Americana & POP.  The ability to write, sing and play anything and everything. It’s important to note that all his songs are written, sung and all instruments performed by Pascale himself.  “I’m affecting people’s lives with my music, and it does not get much better than that” In addition he is truly a world class entertainer and the epitome of a Rock Star. Single handily, if need be, revitalizing and resurrecting Rock Star & Guitar Hero…A must see live! The destination for all your needs. Larry has played with many national artists and has been touted not just for his 4-octave velvet and when need be rugged voice, beautiful guitar work and hit making songwriting but for his knowledge and professionalism in the industry. Larry has forged many relationships in the industry with not just other notables but manufacturers of some of the great gear used by many.  Larry has the ability to sound like just about anyone whether it be singing oldies, falsetto, rock, hard rock, ballads, -can do it all. Larry ‘s cumulative multiple years career in the music industry truly speaks for itself. Premier singer, songwriter, guitarist, bassist, arranger, producer, and engineer. Larry started his music career at the age of 13 and played in several bands including Suite 16, UPRISING and Uncle Sam . Larry embarked on a solo career in 2010 – Present and has released three solo albums to date: “C U On the Other Side”, “Help Me Find Some” and “Black & Blue”. Now on the precipice of releasing the incredible new record “Split Down The Middle” October 2021.