Award-winning singer/songwriter Jamie Alimorad makes his triumphant return to the Las Vegas stage in the prestigious Composers Showcase of Las Vegas on March 4th in Myron’s Cabaret Jazz at the Smith Center. Alimorad joins a lineup that features Las Vegas legends including Ronnie Foster (George Benson, Stevie Wonder, The Jacksons), Keith Thompson (Jersey Boys, The Producers, We Will Rock You), Joey Melotti (Barry Manilow, Michael Bolton, Michael McDonald), and more! Alimorad’s single “Brighter Days” from his album, This Is Tomorrow Calling, is quickly rising in Top40 and AC/Hot AC formats and currently sits at #73 on the New Music Weekly Hot 100. 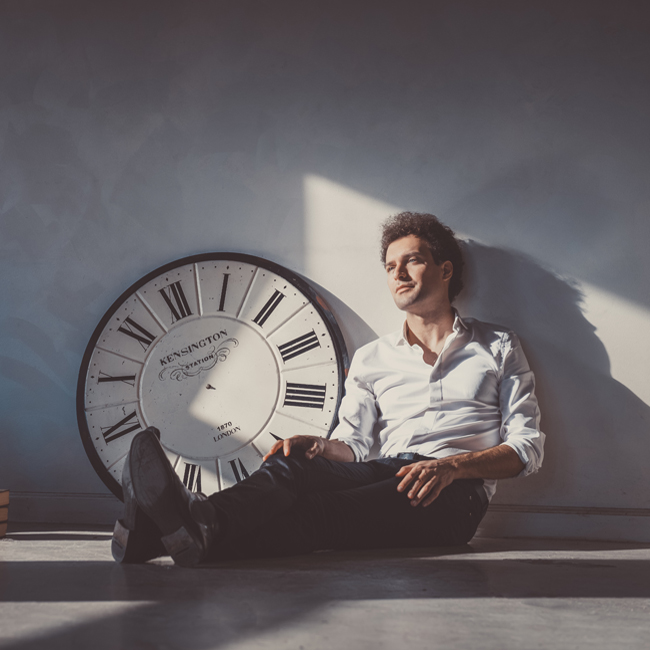 For more information on the Composers Showcase of Las Vegas click here.

ABOUT JAMIE ALIMORAD:
Light first dawned on Jamie Alimorad’s prodigal artistry in Boston’s underground music circuit, while attending Northeastern University. From those humble beginnings, Alimorad dedicated himself to honing his craft as a singer/songwriter and multi-instrumentalist. His time at Northeastern proved invaluable, culminating in a Bachelor of Science in Music Technology, and a blossoming career.

Upon graduating, his music began trickling out from Boston’s indie scene and out into the world at large. He independently released two albums (Cornerstone and Words Left Unsaid) that garnered enough success to warrant his first nationwide tour, taking him through cities, including, New York, Las Vegas, and Los Angeles. The tour’s success led to the 2014 music video for Words Left Unsaid single “Beautiful” hitting over 2 million views on YouTube. Alimorad’s new album This Is Tomorrow Calling released September 27, 2019.

The first two singles, “Not Ready To Say Goodbye” and “Brighter Days”, have quickly become Alimorad’s two most streamed tracks on Spotify, with “Not Ready To Say Goodbye” earning a 2019 Hollywood Music in Media Award nomination for Best Vocal (Male), and Brighter Days winning Song of the Year and Pop Song of the Year in the 24th Annual U.S.A. Songwriting Competition. Teaming up with Grammy-nominated singer-songwriter and producer Gino Vannelli, and Grammy-nominated songwriter and producer Ross Vannelli, the trio have crafted a collection of vocal-centric pop music, that has more than its fair share of innovative twists, and turns, fueled by Alimorad’s effusive passion towards fusing genres. The album tells Alimorad’s coming-of-age story of the years of an artist growing in an ever-changing world, and emerging from his cocoon, fully stretching his wings as a songwriter, musician, and vocalist.

ABOUT THE COMPOSER’S SHOWCASE:
The Composers Showcase of Las Vegas is an entertainment forum that allows local composers and songwriters the opportunity to present original musical material to a supportive audience in an informal cabaret-style setting. Founded and hosted by Keith Thompson (Jersey Boys) and Michael Brennan (Le Reve), the showcase focuses on uniting the Theatre community of Las Vegas, giving creative spirits an outlet for artistic expression, laughing a lot and having a great time. The Composers Showcase is not “open mic.” Each presentation is carefully planned. Composers and material are screened in order to provide the best and highest quality of entertainment. To purchase more than two tickets in the Mezzanine, four tickets on the Floor or to find available open seats at any table, please call the Box Office at 702.749.2000.